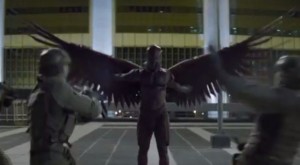 Syfy has released an extended preview of Dominion, its upcoming original scripted drama based on the 2010 film Legion.

Adapted for television by Vaun Wilmot (Sons of Anarchy), Dominion acts as something of a sequel to Legion, taking place 25 years following the events of the film and finding the world as we know it shattered by a war between the angels, led by archangel Gabriel, and mankind, led by traitorous archangel Michael. Cities housing the human survivors have been formed out of the ruins of the war, though they’re victimized by political unrest and two houses vying for power in a world where power comes at a premium. The series will follow the journey of a rebellious young soldier (Christopher Egan) who discovers that he’s the savior of humanity – the Chosen One.

The series premiere of Dominion airs tonight at 9:00 on Syfy. You can check out additional teasers for the series here, here, and here.

Will you be watching Dominion? How do you think the series will compare to Legion? Does Dominion look like a fair enough companion for Defiance?