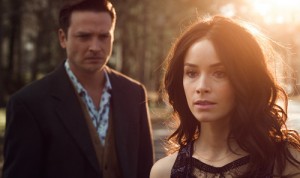 SundanceTV has released a behind the scenes featurette for the second season of acclaimed drama Rectify.

Second two begins merely hours after the vicious beating Daniel took, which put him in a coma and threatened to take him away from his loved ones after they just got him back. Daniel might have been away from home for two decades, but his existence has impacted each member of his family in very distinct ways, meaning that watching him teeter on the edge of death will cause quite a kerfuffle with the Holdens. But even when Daniel battles his way back to consciousness and begins experiencing things that were denied him while he was behind bars, he’s going to have to deal with tension between himself, Ted, and Tawney after what happened at the dealership and the revival. Can Daniel keep proper distance from his step-brother and devote his time to figuring out the way the world works and what his place will be in it? Or will the unresolved conflict between him and Ted pop up again sometime in season two?

The second season of Rectify is set to premiere Thursday, June 19th at 9:00 on SundanceTV. In addition to the behind the scenes featurette, SundanceTV also released character profiles spotlighting Daniel, Amantha, Tawney, Carl, and Ted, which you can watch below.

Will you be watching the second season of Rectify? How long do you suspect Daniel will be in a coma before regaining consciousness? Is Tawney going to be able to stay away from him once he does awaken or is her marriage still going to be in jeopardy in season two?