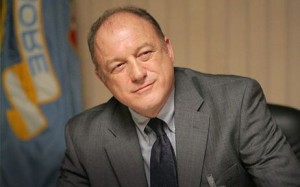 Created by playwright Sarah Treem and Hagai Levi (In Treatment), The Affair tells the story of two married couples torn apart by one indiscretion. High school history teacher Noah (Dominic West) has a chance meeting with damaged waitress Alison (Ruth Wilson), the latter recovering from a recent tragedy), and the two soon find themselves drawn to one another in ways they cannot begin to explain. Their decision to begin an affair has severe and permanent implications for their own psyches, the way they view relationships/intimacy, and their respective marriages – his to college sweetheart Helen (Tierney), hers to ranch manager Cole (Joshua Jackson).

In addition to his role on the FX/DirecTV legal thriller, Doman has appeared on the likes of The Wire, Borgia, and Person of Interest.

The Affair is set to premiere this fall on Showtime. It will be the network’s second new scripted series of the year following the success of psychosexual thriller Penny Dreadful, which has already been renewed for an extended second season.

Will you be watching The Affair? How do you think a show like this can extend itself for multiple seasons? What type of reaction will Bruce have when he learns of Noah’s infidelity?