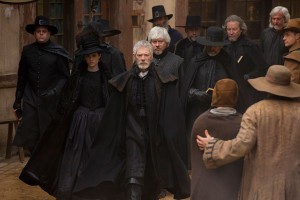 Under Cotton’s watch, Mary and the rest of the witches were able to keep a firm hold over the trials. They could pick the innocents they wanted to die and manipulate him in such a way for the blood they needed spilled found its way to the ground, thereby getting them closer to the Grand Rite. However, with the window closing and Rose being taken out by Mercy, the group of witches were stumbling toward the vaunted event; after being so strong and organized for so long, they had to figure out a way to get the remaining blood they needed without dismantling their entire core in the process. Unfortunately, that mission became much harder with the return of witch hunter Increase Mather.

On the next episode of Salem, Increase’s return to town coincides with immediate and decisive action against suspected witches, meaning that Mary and company are going to have to figure out a way to dispatch him and continue their march toward the Grand Rite. They might not be able to use more nefarious methods in getting rid of Increase, though, since he’ll be stirring up the paranoia among Salem’s citizens and enacting much more stringent security in and around the town. Part of the power from the would-be coven came from their ability to meet in the shadows and lurk around town without being noticed, so an experienced witch hunter now running the trials cuts that off and forces them to change the way they do business. But will those changes make defeating Increase and activating the Grand Rite more difficult? And how many of the witches will be snared by the increased violence and paranoia running rampant throughout Salem?

Elsewhere on Salem, Mary’s power over George becomes compromised when he removes the frog from his system, while Gloriana is named as a witch by Mab.

Do you think that Mary and the rest of the witches will be able to dispatch Increase? How many more innocents will die as a result of the return of the senior Mather? Is George going to get revenge on Mary for keeping him incapacitated all this time?