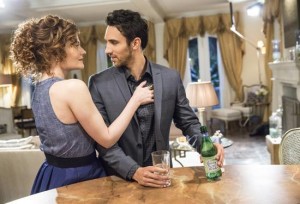 The moment the Powell home was robbed, Evelyn’s renewed sense of interest in her husband was gone. Adrian not standing up to the group of robbers and falling apart in the days and weeks after they left, growing more paranoid that something like that would happen again, took away the one thing that Evelyn always had for him – respect. Through their rough patches – including his unhealthy appetite and the death of their son – Evelyn always respected Adrian, but his cowering over the increased crime in Beverly Hills looked to her like weakness and that’s something she just couldn’t have in her life. But will she be able to keep up her affair with Tony now that Adrian’s back home from the treatment facility?

On the next episode of Devious Maids, Adrian has begun to grow suspicious that his wife is having an affair. Although her distance can be rationalized by the time they spent apart and getting back into the routine of having him in the house, Adrian knows his wife better than anyone – how she acts when she’s angry with him, the change in her body language and the way she carries herself when she’s smitten, the dismissive way she can push people to the side when she’s done with them. Therefore, he can read that the fire she once had for him has been extinguished, replaced with a burning for someone else; the only matter now is to figure out who she’s having an affair with and catch them in the act. But will Adrian be ready for the answer to the question of who his wife has been seeing since he entered treatment?

Elsewhere on Devious Maids, Nicholas asks Marisol a surprising question, while Genevieve invites Zoila and Javier over for dinner, Carmen and Spence deal with Ty’s recent misbehavior, and tensions rise between Lucinda and Rosie.

How long will it take for Adrian to figure out that Evelyn is having an affair? Will Valentina inadvertently end up in the middle of the latest battle between the Powells? Could Rosie be without a job if things don’t calm down between her and Lucinda?