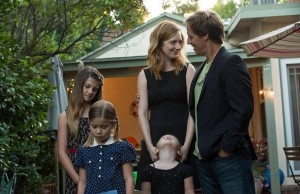 Created by Andrew Gurland (The Virginity Hit), Married follows Russ (Faxon) and Lina Bowman (Greer), a married couple who try to keep the passion alive even while dealing with their three kids, mounting debt, and the bland suburban life that neither of them thought they would have. However, through all the less than ideal situations in their life, they’re reminded that they’re best friends and that they can’t make it through the mountain of problems in their life without the other by their side.

The series premiere of Married is set to air Thursday, July 17th at 10:00 on FX. Married will be one of three new comedies premiering on FX this summer, joining fellow relationship comedy You’re the Worst and Martin Lawrence/Kelsey Grammer collaboration Partners. You can check out a full list of FX/FXX summer premiere dates here.

Will you be watching Married? Do you think Russ and Lina will be able to tackle anything that comes their way? Are you excited at seeing Faxon and Greer as leads on a series rather than supporting players?