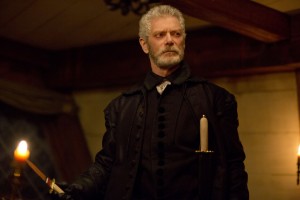 Mary has been able to keep her cool despite some less than ideal circumstances in Salem. The coven has expressed doubt in her ability to lead them to and through the Grand Rite, while she’s still hung up on John, to the point where the momentum she’s generated toward exacting vengeance on the human race is threatening to diminish. It helps that she’s turned Mercy into her latest pet project, thereby declawing one of the biggest threats to the coven, but Mary’s leadership is still under attack and will continue to be so when a powerful witch hunter crosses into Salem city limits.

On tonight’s episode of Salem, Mary must deal with the latest threat to the Grand Rite when a witch hunter sets his sights on Salem and attempts to seize control of the trials. Helping her cause has been Cotton’s cluelessness about the witches in town and the ease with which she can manipulate him, but now that Cotton has laid eyes upon a witch, he might not be the pawn that Mary’s accustomed to, thereby making the presence of the witch hunter all the more dangerous. Cotton can use the witch hunter to help flush the town of magic and prove his worth to the citizens of Salem, while the hunter will be far more aggressive than Cotton ever was in terms of battling the witches, all but removing the shadows that Mary and the coven have been lurking in. Will Mary and the rest of the Salem witches figure out a way to keep their coven hidden from the witch hunter and thus drive him back out of town?

Elsewhere on Salem, feelings between Mary and John intensify, while Cotton deals with a unique accusation in the trials.

Will the witch hunter suss out the existence of the Salem coven? How long will it be before Mary and John act on the feelings that are growing between them? What type of accusation will Cotton have to deal with in the trials?