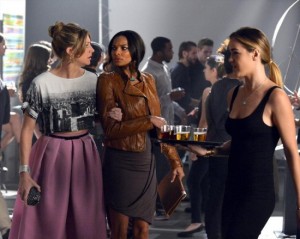 After everything she went through with Paul and Richard, it’s no surprise that April has become more cautious recently, especially when it comes to matters of the heart. While she’s doing her best to protect Lucy from being exposed to too many different men, lest she either become confused or develop even deeper abandonment issues, April is neglecting herself to the point where she needs to have someone else in her life for no other reason than her sanity. It’s human to want to be around someone and it’s human to want to be wanted, but April is going to have to reconcile her guilt if she has any hope of finding a relationship steady and sturdy enough to model for her daughter. The first step to that? Getting back in the dating world.

Monday, June 2nd – “Rebuild”
Eight months later, Savi, having cheated death, makes the most of her second chance. Karen struggles to rebound from loss, both personal and professional. April’s life gets interesting when old friend, Mickey (guest star Joseph May), returns and pushes her to make some changes and Joss tries her hand at a new job, party planner to wealthy Angelenos.

Monday, June 9th – “Boundaries”
April throws caution to the wind and begins a blissful affair with handsome artist Daniel Zamora (guest star Ricky Whittle). Meanwhile, Joss and Harry seem to clash over everything when they’re hired to throw a lavish party for a wealthy housewife (guest star Krista Allen). Savi returns to the firm and bristles at sharing an office with stunning new attorney Antonia Ruiz (guest star Rebeka Montoya), who appears to have no sense of personal boundaries. Karen faces some ghosts from her past when she’s called upon to testify at Elizabeth Grey’s parole hearing.

Do you think April’s affair with Daniel will be exposed? Can Joss and Harry find a way to peacefully work together? How will Savi’s accident and subsequent recovery impact the way she handles herself in the office?