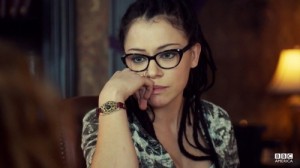 Alison was so sure Aynsley was her monitor that she watched as her friend died right in front of her. However, with the revelation that Aynsley wasn’t the one assigned to watch over her, Alison had to deal with the guilt that came with having the opportunity to save her friend and not using it. Before Sarah came into her life, Alison was a typical suburban soccer mom with a strong family life, but now that clones, experiments, and conspiracies are a part of her normal life, she’s been decidedly off her game, allowing the chaos Sarah wrought to create a paranoia that was responsible for Aynsley’s death. But will Alison be able to deal with her own guilt, as well as any lingering frustration toward the other clones, and move on from Aynsley’s death? Or is the incident going to haunt her throughout the second season of Orphan Black?

Listed below are the dates, titles, and descriptions of the first three episodes of Orphan Black‘s second season.

Saturday, April 19th – “Nature Under Constraint and Vexed”
Season 2 begins with Sarah searching for her missing daughter and suspecting that ruthless pro-clone Rachel is behind the disappearance. Meanwhile, Alison attends the funeral of her fallen friend, Aynsley, which causes Alison to sink into despair.

Saturday, April 26th – “Governed by Sound Reason and True Religion”
Sarah gets Art to help her find Kira and is shocked when she learns where the trail leads. Meanwhile, Alison struggles with Aynsley’s death; and Cosima grapples with the worsening symptoms of her mysterious sickness.

Saturday, May 3rd – “Mingling Its Own Nature With It”
Sarah turns to an old flame from her past as she hits the road with Felix, but their brief respite is brutally shattered. Sarah then realizes that no matter how far she runs it will never be far enough.