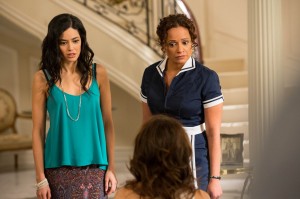 Carmen Luna has reached the top – she’s on the arm of a handsome Latin music star and officially has the world at her fingertips. No longer subjecting herself to the horrors of being a maid, a position she never liked and something she used as a stepping stone, she can now focus on deepening her friendship with Alejandro and figuring out how she can use this opportunity to launch a successful singing career. As such, Carmen will do anything she can to keep her position as Alejandro’s wife, since this is the best chance she’ll ever have of becoming something big and getting her music off the ground without having to demean herself to lecherous record executives. However, could Carmen be on the way out when an old flame of Alejandro’s resurfaces?

Listed below are the dates, titles, and descriptions of the first two episodes of Devious Maids‘ second season.

Sunday, April 20th – “An Ideal Husband”
Season 2 begins with Marisol engaging in a new romance, and Zoila learning that Valentina is back from Africa. Meanwhile, Peri goes to great lengths to keep Spence and Rosie apart; Carmen and Alejandro settle into their fake relationship; and Adrian and Evelyn hire a handsome bodyguard.

Sunday, April 27th – “The Dark at the Top of the Stairs”
Carmen feels threatened by an old flame from Alejandro’s past and goes to great lengths to insure that her career isn’t in jeopardy; Zoila helps Valentina with her job but ignores problems at home; Rosie begins a new job with a dysfunctional family; Marisol tries to make peace with Opal; Peri threatens Spence so he will stay in their marriage; Adrian copes with a home invasion but fails to protect Evelyn in a dangerous situation.

The second season of Devious Maids premieres Sunday, April 20th at 10:00 on Lifetime. You can check out a sneak peek of the season premiere here.