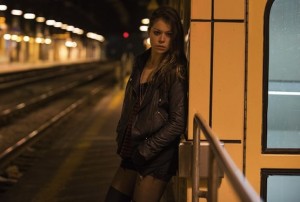 BBC America will be reairing the first season of Orphan Black twice in the days leading up to its second season premiere. Beginning Friday, April 18th at 9:00 a.m., the first ten episodes of the cult phenomenon, starring Tatiana Maslany in a host of roles, will get an encore, with recent special Orphan Black: The Cloneversation to punctuate the marathon at 7:00 that evening. The full season will then begin again at 8:00 and play through 11:00 a.m. Saturday morning.

Friday, April 18th
9:00 a.m. – “Natural Selection”
Sarah, an orphan, gets caught up in a deadly conspiracy after learning that she is a clone. In the opener, Sarah witnesses the suicide of a woman who looks just like her and assumes the victim’s identity in hopes of escaping her troubled life.

10:00 a.m. – “Instinct”
Sarah continues to impersonate Beth and gets her a second chance on the force.

11:00 a.m. – “Variation Under Nature”
Sarah’s fake detective ruse stretches thin when the police find the body that she buried.

12:00 p.m. – “Effects of Extreme Conditions”
Sarah gets closer to finding the killer, but her efforts threaten to end her chances of a reunion with her daughter.

1:00 p.m. – “Conditions of Existence”
Evidence suggests that the orphans are part of an ongoing experiment. Sarah suspects Paul, but her probing inadvertently triggers Paul’s own investigation.

2:00 p.m. – “Variations Under Domestication”
Alison’s paranoia puts all of the orphans at risk. Meanwhile, Sarah must decide who to trust with her secret.

3:00 p.m. – “Parts Developed in an Unusual Manner”
Sarah confronts the conspiracy head-on, while the trust between herself and Paul weakens. Meanwhile, Cosima grows closer to Delphine and the mysterious Dr. Leekie.

4:00 p.m. – “Entangled”
Sarah’s actions pit the orphans against each other; Paul tries to cover up Sarah’s existence; Alison takes vengeance on her suspected monitor.

6:00 p.m. – “Endless Forms Most Beautiful”
The Orphans must decide whether to make peace with their creators; Sarah is forced into a showdown with the enemy.

The second season of Orphan Black is set to premiere Saturday, April 19th at 9:00 on BBC America. You can check out a season two trailer here.