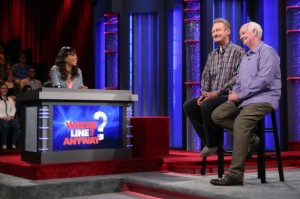 The CW has become the last network to reveal their summer 2014 premiere dates, beginning with the summer premiere of Whose Line is It Anyway? on Monday, June 2nd. Also returning June 2nd is Beauty and the Beast, with the final episodes of its second season premiering at 9:00.

The  new series premiering this summer on The CW are Famous in 12, where a family moves to Los Angeles with the goal of getting famous; Backpackers, a comedy that originated on CW Seed, the network’s digital portal; Seed, a Canadian import abut an underachieving sperm donor; Penn & Teller: Fool Us, where aspiring magicians try and fool world-famous Penn & Teller using their best tricks; and Masters of Illusion, a showcase of magic and illusion hosted by Dean Cain.

Not receiving a premiere date at this time are Barber Battle, a reality-competition series hosted by Cedric the Entertainer, and America’s Next Top Model, whose 21st cycle will feature the return of original mentor Miss J. Top Model didn’t have a premiere date for its last cycle announced until June, so it might be a while before we know when to expect more of Tyra and company.

Not returning from last summer are Capture, Perfect Score, and Oh Sit!.

What will you be watching on The CW this summer? Would you like to see Top Model back as a fall show? Should The CW be moving Whose Line around as much as they are?