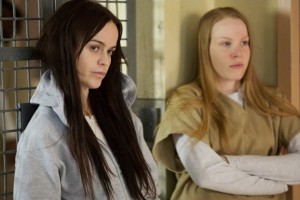 Netflix has released the second season trailer for acclaimed dramedy Orange is the New Black and one thing is for sure: Piper has more than adjusted to life behind bars. Following the incident with Pennsytucky outside the Christmas Nativity Play, she’s being held in solitary, which she refers to as “home,” and shows flashes of a newly aggressive side that’s more self-preservation than anything else.

Also of note is the presence of a new inmate in Vee (Lorraine Touissant), someone from Red’s past who the former prison cook would rather not see again. Prisons all have delicate ecosystems that get thrown off balance by the introduction of powerful new entities and for the women of Litchfield, Vee will be that entity, someone whose entry into their world will cause alliances to shift and power to be acquiesced – whether they like it or not. But will Red be able to survive being locked away with the one woman she’s genuinely afraid of?

Quickly becoming the most watched and talked about show distributed by Netflix, Orange is the New Black has picked up a Peabody Award, a People’s Choice Award, and four Satellite Awards, as well as a spot on the AFI Program of the Year list for 2013, since the release of its first season. The show has also been nominated for a Grammy, a Golden Globe, a GLAAD award, and four Writer’s Guild of America awards.

The second season of Orange is the New Black is set to be released June 6th by Netflix.

Will you be watching the second season of Orange is the New Black? Do you think Orange is a show whose enjoyment is enhanced by the binge watching experience? What do you hope to see happen during season two?