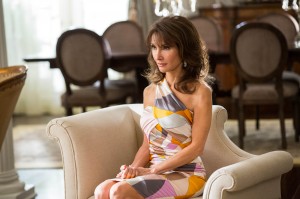 Lifetime will be airing a Devious Maids marathon leading into the show’s second season premiere. Beginning Sunday, April 20th at 10:00 a.m., the second through tenth episodes of the breakout hit, which became Lifetime’s fastest growing drama and nearly doubled its ratings from series premiere to season finale, will be replayed, capped off by the second season premiere. You can check out times, titles, and descriptions of the episodes that will be reshown, as well as a preview of the second season, below.

10:00 a.m. – “Setting the Table”
Zoila gets irritated when Valentina tries to get closer to Remi; Spence accuses Peri of cheating; Carmen takes advantage of Alejando and Odessa being out of the house; Marisol tries to figure out a way to spend more time at the Powell house.

11:00 a.m. – “Wiping Away the Past”
Michael’s ex-wife reveals a shocking secret about Taylor’s past; Adrian tries to cheer up a recently divorced friend; Valentina and Genevieve attempt to get Remi to see Valentina as more than just a friend; Spence offers to help Rosie out of a bind; Carmen secures a meeting with a major music producer.

12:00 p.m. – “Making Your Bed”
Genevieve’s brother returns and complicates life for Zoila because he once broke her heart. Meanwhile, Rosie vows to help Spence with his marriage; Marisol works a fund-raiser at the Powell house in order to uncover more information on Flora’s murder; and Alejandro allows Carmen to be a guest at the party he is hosting while Odessa works in her place.

1:00 p.m. – “Taking Out the Trash”
A visitor from Carmen’s past shows up at Alejandro’s house; Valentina meets Remi’s new friend; Peri becomes convinced that Spence is having an affair and tries to bribe Rosie into giving her the woman’s name; Evelyn and Adrian celebrate an important birthday.

3:00 p.m. – “Taking a Message”
A former student recognizes Marisol, potentially blowing her cover. Meanwhile, Valentina makes a discovery about Remi and reaches out to Zoila for help; and Carmen and Sam clash over their relationship.

4:00 p.m. – “Minding the Baby”
Genevieve lies to her new boyfriend about her age, much to Zoila’s dismay. Meanwhile, Rosie starts work at the Powell’s house; Carmen learns that Odessa is hiding something; and Marisol goes with Taylor to a fertility clinic.

5:00 p.m. – “Scrambling the Eggs”
Evelyn blackmails Rosie so she can spend more time with baby Tucker; Marisol discovers some new information about Flora; Zoila gets upset when Genevieve presents her with an interesting proposition for Valentina; Carmen is troubled by Alejandro’s reaction to Odessa’s illness.

6:00 p.m. – “Hanging the Drapes”
Valentina worries Remi will hate her when he returns from rehab; Rosie wants Spence to defend her honor after Adrian propositions her; Marisol learns that her son is involved with nefarious activities; Carmen experiences trouble honoring a favor for Alejandro; Taylor and Michael get exciting news.

7:00 p.m. – “Cleaning Out the Closet”
Alejandro and Carmen offer different opinions about his new relationship; Marisol gets closer to the truth; Rosie cleans up a serious mess for Peri; Philippe and Genvieve grow closer, but Zoila doesn’t believe that he’s changed his philandering ways.

8:00 p.m. – “Getting Out the Blood”
Marisol puts herself in harm’s way when she digs deeper into Flora’s murder; Peri tries to get Rosie to forgive her; Carmen rekindles her relationship with Sam; Zoila continues to disapprove of Genevieve and Phillipe’s relationship; Remi makes a major decision that puts Valentina in a difficult position.

The second season of Devious Maids premieres Sunday, April 20th at 10:00 on Lifetime. You can check out a sneak peek of the season here, as well as a full recap of the first season finale here.