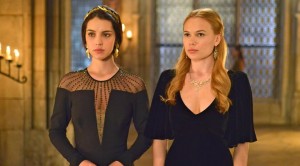 For the most part, Mary’s been alone during her time in Scotland. Although she went through with the marriage to Francis, she’s noticeably grown apart from her ladies, things with Bash are more than a little awkward, and there’s a certain level of unsteadiness to her relationship with the next King of France. They may love each other from here to the heavens and back again, but they have the weight of their respective country on their shoulders and soon enough, that’s going to exert influence on how they interact with one another. If they can find a way to compartmentalize the pressure they’re facing, they might have a chance, though on tonight’s episode of Reign, they face a test when Mary’s brother James comes to visit.

James visits France to convince his sister to return to Scotland at once, which she agrees to. However, Francis uncovers the real reason James is so insistent on having his sister return to their home country and it’s nothing to do with missing her company; there’s a plot formulated by Marie de Guise that would destroy Mary and Francis must now try to persuade his wife to stay in France and avoid putting herself in a position to be taken advantage of in Scotland. Mary, though, believes Francis is trying to isolate her from her country and stand in the way of her leading, so unless he’s willing and able to provide tangible proof that going back to Scotland would put her in danger, the two will be forced into the first major conflict of their marriage, all due to matters of country rather than matters of heart.

Elsewhere on Reign, Catherine and Kenna take drastic measures to deal with Penelope, whose power is increasing as Henry’s madness intensifies, while Lola becomes wary of Lord Julien’s motives in proposing to her.

Will Mary and Francis be able to survive James’ visit? Is Penelope on the way out now that Catherine and Kenna are plotting against her together? Should Lola be wary of Lord Julien’s motives?