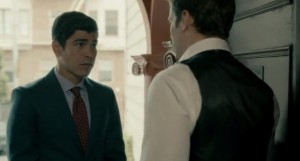 Before Patrick introduced Richie to his friends, he was feeling confident about the state of their relationship, enough to where he called the barber his boyfriend before the two even had that conversation. Granted, after the day they spent together in the city, it seemed as if they were all but together, but with Patrick’s poor relationship history and commitment-phobia, it was a huge personal step for him to take that kind of initiative. It turns out, though, that said confidence was shaky, since Agustin’s question about whether he was slumming being with Richie got into Patrick’s head and raised doubts about whether Richie was the guy for him after all.

On the next episode of Looking, Patrick runs into Kevin at his sister’s wedding while without Richie, something that causes even further complications in his line of thinking. What’s been the main problem in his love life is that Patrick cares too much about what other think about his boyfriends – he wants to have somebody that everyone else feels is right for him rather than trusting his heart and his head to find the one, a sign of his insecurity. Kevin is the type of guy that Patrick thinks that his loved ones want him to be with, someone with the type of prestige and success that impresses at dinner parties and social gatherings, and that might be part of the reason Patrick is so drawn to him – he is the ideal, the guy he could take home to impress his parents. But will Patrick be able to get out of his head long enough to realize that his attraction to Kevin is another in a line of self-sabotaging moves meant to keep himself as unhappy as he has been lately? Or is he going to go after Kevin, thereby making things awkward at work and ruining any chance he has of making things last with Richie?

Elsewhere on Looking, Dom rebuffs Lynn’s advice on how to handle his restaurant popup, while Agustin drops out of the art show due to his dissatisfaction at the photos of Frank and CJ.

Looking airs Sundays at 10:30 on HBO. The show was renewed for a second season earlier this week.

Why do you think that Richie decided to ditch out of the wedding early? Will seeing Kevin cause Patrick’s feelings for Richie to become more complicated? How will Frank handle Agustin dropping out of the art show that he fought so hard to get into?