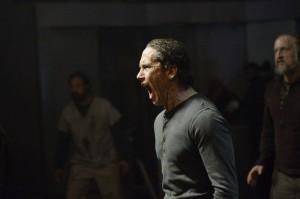 Alan was led to believe that Level R was the bottom of the research facility, that the vectors were being held in as tight a captivity as Arctic Biosystems would allow. It brought peace of mind in that all those infected posed less of a threat with one way of getting out into the rest of the base and made Alan feel as if he knew what was going on in the facility, top to bottom. However, Hatake has been less than truthful since the CDC has arrived at Arctic Biosystems and that deception, as much as it’s been about self-preservation and maintaining some semblance of order, comes back to haunt the team on tonight’s episode of Helix.

That’s because there’s another level in the base that the CDC weren’t made aware of – Level X, which contains the original samples of both strands of the NARVIK virus that Hatake created. He claims that being responsible for the creation of the virus was ultimately a decision that was beneficial for the world at large, seeing as how he didn’t provide Ilaria with both the virus and the cure, before warning what remains of the team that the corporation isn’t going to stop until they get what they want. As intimidating as she might have been, Constance was merely a harbinger of things to come, the first shot in an impending war over rights to the virus and the future of the human race. If Alan, Julia, and Sarah are able to destroy the remaining traces for the virus or, at the very least, use Julia’s blood as basis for an antidote, there’s a chance that NARVIK can be contained or eradicated entirely, but will they have enough to do what they need to do? And how will they find the time to work up a cure while preparing themselves for an impending invasion of Ilaria hired guns?

Will Alan and Julia be able to find and destroy what’s left of the NARVIK virus? Should they take the original samples from Level X and use the virus to create an antidote?