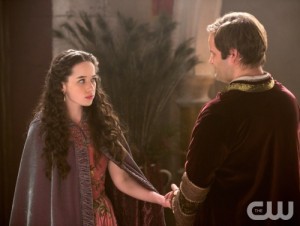 As much as Mary’s ladies want (and perhaps need) to focus their attention on court, the reason they’re there in the first place is to help their families social standing, so the loyalties of Greer, Kenna, and Lola lie moreso with their loved ones than with any potential husbands. Even, in Lola’s case, when their family becomes a liability, as her brother Frederick has with his penchant for gambling and finding trouble wherever it may lie. Though she’s long grown tired of bailing him out of trouble, on tonight’s episode of Reign, Lola heads to the Paris Burgundy House to square away another gambling debt and finds something else entirely.

That’s because when Lola gets accosted by the man who Frederick owes money, she gets rescued in a sense by Francis, posing as a viscount and looking to win Lola’s freedom and wipe away the debt with a quite card cutting. One card, one outcome – Francis may have the best of intentions in coming to Lola’s aid, but it’s a very risky play, one that, if things go sideways, he might not be able to talk himself out of. It’s one thing for Francis to go around and sow his own wild oats after things ended with Mary, as he never had the opportunity to acquire the life experiences that his brother did, and it’s another for his wild streak to potentially bring harm to other people. Will he be able to help Lola brush off the owner of the Burgundy House and get her back to court safely? Or is Lola going to be forced to rescue herself?

Elsewhere on Reign, Clarissa kidnaps the younger children of Catherine and Henry.

What do you think Francis is doing in Paris in the first place? Why would Clarissa kidnap Charles and Henry? Can Catherine, Bash, and Mary get the children back safely?