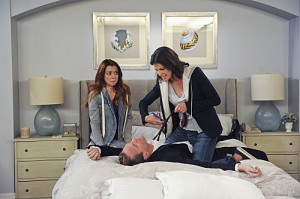 After a mini-hiatus, How I Met Your Mother returned Monday night and made some actual progress as far as wedding day shennaigans go.

Plus, we got a glimpse of the mother being pulled into the fray of the gang.

The episode opens with Ted and the Mother attending a New Year’s party on the eve of 2022, where Ted notes that he made a vow never to get horribly horribly drunk ever again.  Flashback to 8 AM on the morning of Barney and Robin’s wedding.  Barney is currently in the middle of his worst hangover ever – so bad that he can’t even take a good picture – and the four remaining sober must figure out how to pull him out of it before they have to take wedding photos.

We follow as Ted and Marshall attempt to gather all of the known ingredients for the Elixer while Lily and Robin do everything they can to get the mystery ingrediet out of comatose Barney (this includes, ice water, threatening to cut his tie, and making out).  Throughout the ordeal each of them vows to never get as drunk as Barney is – only to have flash-forwards reveal that they will.  These include glimpses of Marshall’s running for State Supreme Court, Marvin’s first day of college, and a suspicious morning with Barney and Robin that seems to suggest they have experience living with an infant (even though the infant in question in the scene is not theirs).

In a brief moment of clarity Barney reveals to his friends that he lied about the Elixer.  There is no magic hangover cure – he tricked them because he loves them.  As Ted explains, all of their worst hangovers happened at the absolute worst times, and Barney was just trying to help his friends.  It seems as if everyone is ready to enact “Weekend at Barney’s” – one of Barney’s plays – to get through photos, and they even tell Barney that yes, they did execute the play….

but they didn’t.  Photos are cancelled and Robin’s angered father kicked Barney in the crotch.

Closing the episode, Ted continues the Fixer Elixer tradition by serving it to the mother after that New Year’s party.

This episode was a great way to come back.  It was funny and touching – exactly what these final episodes should be.  Hopefully from here on in we will get to see more and more of the mother, as we also get closer and closer to the end of the aisle (“The End of the Aisle”) is also the title of HIMYM‘s penultimate episode.

“Rally” not only showed how these five friends care for each other, but also set-up the fact that their relationships aren’t necessarily changing anytime soon.  The flash-forwards into the future suggest their happy ending, yet in each situation nothing about these characters has really changed.  Lily still manages Marshall when he gets in over his head and cuts loose when the chance is offered – after bringing Marvin to college – and Robin and Barney still have a knack for getting into…some kind of interesting position.

What did you think of “Rally”?