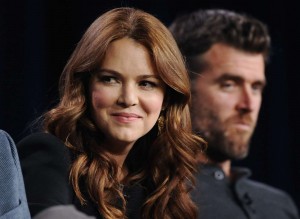 Deadline is reporting that Zero Hour actress Jacinda Barrett has signed on to Netflix’s upcoming psychological thriller from the creators of Damages. She’s set to play the strong-willed and devoted wife to John (Kyle Chandler), the middle brother in a close-knit family forced to deal with the return of their black sheep (Ben Mendelsohn).

Netflix has been readying its next round of scripted originals after a 2013 that saw House of Cards become a solid awards player, Orange is the New Black leap into the cultural zeitgeist, and Arrested Development return with a divisive fourth season that played with the format of episodic television. The streaming service, which continues pouring resources into scripted development, will next be premiering the second seasons of Hemlock Grove and Orange is the New Black, with Sense8, a science fiction series created by the Wachowskis, to debut this summer.

In addition to her role on last season’s ABC adventure series, Barrett has appeared on the likes of Suits, Millennium, and Zoe, Duncan, Jack, and Jane. She joins a cast that includes Sissy Spacek (Coal Miner’s Daughter, Big Love) as the family matriarch and Linda Cardellini (Freaks and Geeks, Mad Men) as skilled attorney Meg, the youngest sibling in the family.

Production on the still untitled thriller is set to begin next month. Further information about the project, including casting and possibly a working title, should be revealed in the coming weeks.

Does this sound like a show that you’ll binge watch? Can it become the next Netflix awards magnet, considering the team involved in front of and behind the camera? What type of originals should Netflix develop next?