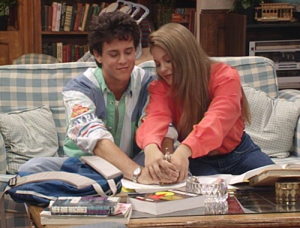 Entertainment Weekly is reporting that Full House alums (and former on-screen couple) Candace Cameron Bure and Scott Weinger will reunite on the second season finale of The Neighbors. The two are set to play new visitors to the neighborhood, though details of who they are, how they arrived in the neighborhood, and what they want have been kept under wraps.

While Cameron Bure wrapped a role on ABC Family gymnastics drama Make It or Break It in 2012, she’s mostly kept quiet in terms of acting since the last days of Full House, having appeared in a handful of TV movies in recent years. Weinger, meanwhile, joined The Neighbors as a writer this season and most recently appeared on an episode of Mistresses. The two will be the latest guest appearances in a season that has seen the likes of Mark McGrath, Jerry Springer, and Wendy Williams, in addition to their Full House cast mate Lori Loughlin. In the pipeline for The Neighbors is a recurring role for Joshua Sasse as Larry’s brother, who comes to Earth to fix the mess that has been created.

The Neighbors airs Fridays at 8:30 on ABC, with the next original episode set for February 28th. ABC has the last four episodes available to watch through WATCH ABC, though the show will have to up its live numbers in order to get in the conversation for another season. With its move to Fridays, The Neighbors was given perhaps the least compatible lead-in and lead-out it could have gotten and has struggled to find an audience while Suburgatory does no better in the Wednesdays at 8:30 time slot that it did last season.

Who do you think Cameron Bure and Weinger will ultimately be playing? Will their appearance result in the type of meta commentary that pervaded the season one finale? Is there a chance that The Neighbors makes it to a third season?