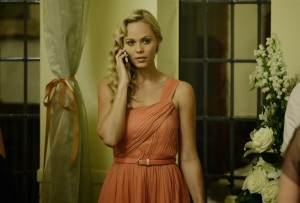 If Elena had known how to leave the pack before now, she would have already separated herself from her life at Stonehaven and gone on to a life of photography and Philip in Toronto. However, she doesn’t know how to get around the responsibility she feels for Jeremy and the like, a responsibility that has disrupted the peaceful existence she built for herself ever since she left the compound and went off on her own, so she can running when she was summoned by the Alpha. What Elena didn’t count on when she arrived back at Stonehaven is how strong her loyalties to the pack still are and how entrenched she would become in the world she thought she left behind.

On the next episode of Bitten, Daniel tracks Elena down in Toronto and warns her about the state that Clay finds himself in following her absence. He’s reverted back to the violent, vindictive man that he was before Elena returned to Stonehaven and Daniel claims that the danger he currently poses to all those around him could find her. Unless, of course, she opts to leave the pack, which he conveniently knows the shortcut to. There’s the likely possibility that Daniel is attempting to weaken the pack by taking down their strongest tracker without getting his hands dirty, but what if he’s right? What if the violence in and around Stonehaven has only escalated and will continue to do so due to the war with Kane and Marsten? Though Elena may still have feelings for Clay and care about the safety of all those still in the pack, is she willing to risk her life based on the past the group shares together and the loyalty that has been instilled in her biologically?

Elsewhere on Bitten, Jeremy must fight to keep his Alpha status in tact.

Do you think Daniel is being honest about Clay’s current state of mind? Should Elena return to Stonehaven or continue her life in Toronto without looking back? Who would be brave (or stupid) enough to step to Jeremy and try to become the new Alpha?