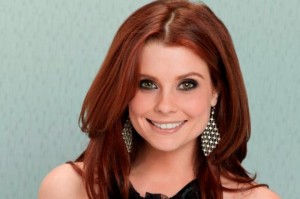 According to The Hollywood Reporter, Reba alum JoAnna Garcia Swisher has become the first cast member of upcoming ABC summer series Astronaut Wives Club. She’ll be playing bouncy redhead Betty, whose downhome appeal and folksy accent endear her to the public at large. However, Betty’s clairvoyant gift when it comes to her dreams has her worried about the fate of her husband Gus, one of the original astronauts. Is she simply manifesting her fears about losing her other half through her dreams? Or could Gus be in some serious trouble while on the mission that could turn him into a hero?

Developed for television by Stephanie Savage (Gossip Girl), period drama Astronaut Wives Club will follow the group of women who stood beside their husbands during the height of the space race and became national figures as a result. The series is the third straight-to-series order ABC has made in recent months, following an untitled David O. Russell soap and an American adaptation of crime drama Secrets & Lies, and will be used alongside Mistresses to bolster the network’s scripted presence in the summer. Other scripted shows that ABC will be airing this summer include the fifth season of Rookie Blue and the second season of Motive, both Canadian imports.

In addition to her six seasons on the WB/CW comedy, Garcia Swisher has appeared on the likes of Gossip Girl, Once Upon a Time, and Better with You.

Will you be watching Astronaut Wives Club? Do you think Garcia Swisher is a smart casting choice for Betty? Who else would you like to see join the cast?