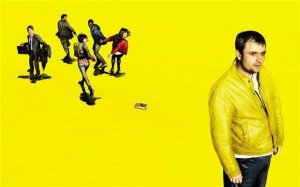 According to The Hollywood Reporter, HBO has ordered comedy The Brink and drama remake Utopia to series.

Executive produced by the likes of Jerry Weintraub (Behind the Candelabra) and Jay Roach (Game Change), The Brink tells the story of how a geopolitical crisis impacts the lives of three powerful men. Tim Robbins is set to play the U.S. Secretary of State, while Jack Black will portray a lowly staffer caught in the middle of the chaos. The first episode will be penned by Robert0 Benabib (Weeds) and his brother Kim, with Emmy winner Roach directing. Utopia, meanwhile, is a remake of the 2013 British conspiracy thriller of the same name. From David Fincher (House of Cards) and Gillian Flynn (Gone Girl), the series follow a group of die-hard fans of a graphic novel who uncover the existence of a sequel, only for the hunt for the novel to put them in the type of danger they had only previously read about. Original executive producer Jane Featherstone will be involved in the American remake.

HBO has been in a transition period recently, as they recently said goodbye to Treme and will be concluding The Newsroom, Boardwalk Empire, and True Blood during 2014. Additionally, Family Tree and Hello Ladies were each cancelled after one season, so the premium network is rebuilding both its comedic and dramatic slates. Already this year, True Detective and Looking have premiered on HBO, with tech comedy Silicon Valley and The Leftovers, Damon Lindelof’s return to television, set to debut later in 2014. Assuming each of its new shows make it to a second season, HBO will have an hour in the summer seemingly penciled in for Utopia, as The Leftovers also has genre leanings, while the fall will consist of The Brink, another new comedy, and a new tent pole drama.

Will you be watching either The Brink or Utopia? Where do you think HBO should schedule The Brink? Can Utopia capture the magic that landed the original series critical raves and a second season renewal?