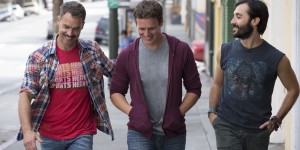 For years, Dom dreamed of opening his own restaurant and getting himself out of the endless tedium that is waiting tables, but once he forked over the $8,000 for Ethan to get sober, his dream became a lot less attainable and thus, his motivation to change his life dwindled. As much as Dom hates being at the restaurant and not progressing in the way that he would like, he’s been beaten down enough by time to where pushing himself to do something that seems impossible is a lot more difficult than it was a decade ago; he’s aware of what he’s wasted in staying stagnant and he knows that there’s so much to do before he realistically has a shot at achieving his dreams. However, once he stood up for himself against Ethan and let out the feelings he had internalized for the past eight years, things might not look so daunting as they once did.

Listed below are the dates, titles, descriptions, and encore information for the next four episodes of Looking.