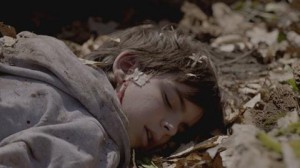 The Mutt’s recklessness has made things around Stonehaven as tense as ever, as the fate of the pack could lie in the hands of someone who doesn’t exactly have their best interest at heart. While the fact that he’s openly killing and not hiding the fact that it’s a wolf attack is one thing, it’s another entirely for the bodies to wind up on the Danvers’ property, thereby implicating the pack and indicating that there’s a personal vendetta for the killings. The Mutt wants to be noticed and he wants the pack to know that they’re being targeted, but a greater possibility is that he wants the town to grow more suspicious of the Danvers family and suss out that there’s something not quite right with them, putting in danger the existence of the pack. But is his plan to stoke the paranoia in town working?

On tonight’s episode of Bitten, the second body has been discovered, this time of the Richardson child who was attacked in an alleyway. While Clay wants to move the body in order to keep the town from becoming even more paranoid, ultimately the little boy is discovered with the pack crowding around him, fulfilling the Mutt’s desires of implicating the Danvers family as being culpable in the recent string of murders. Even if the hunters who find the boy believe that no one at Stonehaven killed the boy themselves, they know that there’s something nefarious going on and as such, will be paying even closer attention to the happenings in and around the estate. This could mean that even more hunters will be stationed at Stonehaven, making the pack’s transformations more difficult and giving the Mutt even more room in which to kill without recourse.

Elsewhere on Bitten, old feeling between Elena and Clay resurface, while the Mutt gets tracked to a warehouse in town where he publicly turns.

Bitten airs tonight at 8:00 on Syfy. You can check out a preview of the episode here.

Will the pack be able to redirect any police investigation away from Stonehaven? Why do you think the Mutt is dumping bodies on the pack’s property? Should Elena act on her old feelings for Clay or have they only resurfaced due to the severity of the situation they’re in?