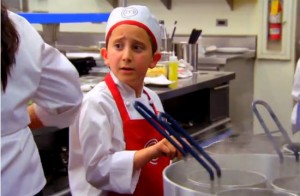 FOX has announced that reality competition series MasterChef Junior has been renewed for a second season following a fall performance that improved its time period by 58% in adults 18-49.

“MasterChef Junior is one of the few shows on television that the entire family can truly enjoy together, and  I can’t wait to see what Gordon, Joe, Graham and the next round of rambunctious, ridiculously talented junior chefs cook up in Season Two,” said FOX Broadcasting Company Chairman of Entertainment Kevin Reilly.

The latest series from kitchen guru Gordon Ramsay, MasterChef Junior pitted kids between the ages of eight and 13 against one another in a series of challenges that demonstrate their culinary ability and passion for cooking. Among the challenges Ramsay, restaurateur Joe Bastianich, and chef Graham Elliot had to judge the contestants were the judges’ favorite childhood foods, desserts, and restaurant takeover, with the winner of season one being three-time challenger winner Alexander.

During its first season, which concluded November 8th, MasterChef Junior averaged 5.1 million total viewers and ranked No. 1 in its time period among Adults 18-49, Adults 18-34, Women 18-49/18-34, Men 18-49/18-34 and Teens. The success of the series allowed FOX to make the awkward transition from the beginning of its fall season to the World Series, an event that often wreaks havoc on the moment of its scripted series, a bit more smoothly and be able to concentrate on other nights with its surprisingly strong Friday. There’s no guarantee that the show will stay on Fridays in the fall, though, especially since Ramsay’s other series have been used to plug holes in the network’s schedule over the past several years.

What did you think about the first season of MasterChef Junior? How could the show be improved for the upcoming second season? Is FOX in danger of being on Ramsay Overload or was the execution of something like MasterChef Junior fresh enough to where it could survive for several more seasons?