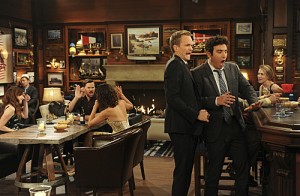 CBS has revealed that the one-hour series finale of How I Met Your Mother is set to air Monday, March 31st at 8:00, which will then lead into the special premiere of Friends with Better Lives. The latter, which stars the likes of James Van Der Beek and Majandro Delfino, tells the story of a group of six friends at different stages of their lives who might seem outwardly happy but inwardly question whether their friends have it better off than they do. Friends with Better Lives then moves to its regular 8:30 timeslot on April 7th, leading into the NCAA Men’s Basketball Championship, before being joined the following week by 2 Broke Girls at 8:00. It’s the third move of the season for 2 Broke Girls, which started the season off at 9:00 before being shifted to 8:30 in favor of Mike & Molly‘s return.

It’s surprising that CBS isn’t opting to use the ratings power of the final episodes of How I Met Your Mother during May sweeps, though it does make sense for the network to use said power on a new series and test out one of their veterans to see just what could successfully in Mother’s shoes at 8:00 next season. This is the first midseason move that the network has made this season and fittingly, it’s for the benefit of the Monday comedy bloc, one of the weaker aspects of their schedule thus far in 2013-2014. Further scheduling moves from CBS should be announced in the coming days/weeks.

Still without a premiere date are midseason comedy Bad Teacher, based on the movie of the same name, and legal drama Reckless, starring Cam Gigandet.