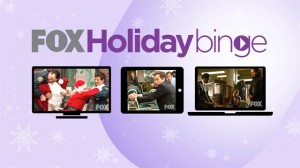 Are you behind on New Girl? Have you already forgotten about the terror Joe Carroll and his followers brought to The Following? Do you want to get into Brooklyn Nine-Nine for the first time?

Well, you’re in luck, as FOX will be offering episodes of those three shows plus every other fall 2013 comedy (The Simpsons, Bob’s Burgers, Family Guy, American Dad, Dads, The Mindy Project) and drama (Almost Human, Bones, Sleepy Hollow, Glee) as a part of their holiday catch up binge. Beginning Sunday, December 22nd, audiences will have the option of catching up on their favorite fall shows through four different platforms: FOX.com; Hulu; the FOX NOW app; and FOX On Demand from cable providers including AT&T U-verse, Charter, Cox, Mediacom, Optimum, Suddenlink, Time Warner Cable, Verizon FiOS, and Xfinity. The FOX NOW app is available on iOS, Android, Windows 8, Windows Phone 8, Xbox One, Xbox 360, Roku and Samsung Smart TVs and Blu-ray players.

While full current seasons for each of FOX’s fall shows will be available, the entire first season of The Following is set to roll out in batches of 4-5 per week as an easy way for fans to discover the world of Ryan Hardy and Joe Carroll or refresh themselves in time for the January 19th season premiere. The series will then return for its second episode on Monday, January 27th at 9:00 following an encore of the season two preview that will air behind the NFC Championship game. The Following was originally scheduled to air its second episode on January 20th before the network made some adjustments and allowed for a two-hour Sleepy Hollow season finale.

Which FOX shows will you be catching up on during hiatus? Do you think that this idea will help the ratings come January? Would you like to see more networks make episodes available during hiatus so that fans can catch up or discover something new?