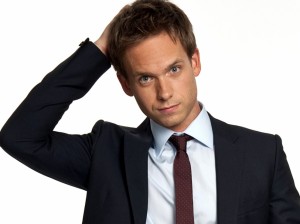 Add one more character to the list of those Sarah, Cosima, and Alison will be encountering during the second season of Orphan Black, as Patrick J. Adams (Suits) has signed on to guest star on the BBC America sci-fi thriller. He’s set to play Jesse, a brave but regular guy whose life gets turned upside down once he comes into contact with the clones. There’s no word yet on when his episode will air, the circumstances by which he meets the clones, or which clones he’ll be most directly involved with.

When we last left Orphan Black, Sara’s daughter Kira had been abducted from her room, so the main objective when the season kicks off is to bring her back, which Cosima and Alison will assist Sara with. As such, the three set off hot on Kira’s trail, meaning that Jesse could be located anywhere and be doing anything when he comes into contact with the clones. Presumably, Kira will be kept near enough the area to where whoever took her can quickly and easily get their demands, so it’s possible that Jesse is a local who has some type of ability that’s valuable to the clones and could be put to use in getting Kira back. But will he be the difference in getting Kira back?

In addition to his role on the USA legal drama, which returns March 2014, Adams has appeared on the likes of Pretty Little Liars, Luck, and Friday Night Lights. He joins a slate of new additions to the series that include Michiel Huisman (Treme), Peter Outerbridge (Nikita), and Ari Millen (Rookie Blue).

The second season of Orphan Black is set to premiere Saturday, April 19th on BBC America. You can check out a teaser for this season here.

How do you think Jesse will come into the clones’ universe? What are you expecting to happen this season on Orphan Black? Is Sara going to be able to get Kira back unharmed?