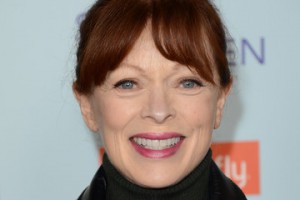 I hope I’m not the only one excited for this recent Castle scoop!

According to TV Guide, the crime drama has cast Frances Fisher (Titanic) to appear in an upcoming Devil Wears Prada-themed episode.  The episode, yet untitled, but scheduled to air next month has “a little Devil Wears Prada feel to it with an Anna Wintour type character,” said the show’s creator Andrew Marlowe.  Wintour, of course, the editor-in-chief of Vogue who inspired Meryl Streep’s Miranda Priestly in the novel and film.

But that’s not all.  “In investigating the case, we discover that the Anna Wintour character, Matilda King, who runs this magazine, Modern Fashion, crossed paths with Beckett when she briefly flirted with a career as a model.  If you remember back to season two (episode: “Inventing the Girl”), we learned that Detective Kate Beckett was once, in fact, a model in her younger days.

Fisher’s television credits also include Touch, The Shield, Eureka and many more.

The episode is currently scheduled to air on January 27th.