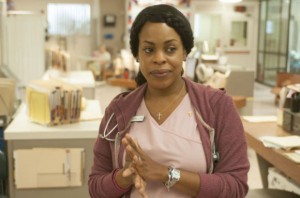 Patsy didn”t exactly have the best first day at Billy Barnes, as he came into a unit that was chaotic, understaffed, and disorganized and patients that were disrespectful and unwilling to fall in line. By the recent upheaval with Beverly leaving and Jenna being moved over on a permanent basis, he knew that there would be a lot of work to do to get the facility up to where it needed to be, but there wasn”t anything that encouraging for him to hang his hat on. Which made DiDi”s remark hit all that much harder.

On tonight”s episode of Getting On, Patsy has filed a grievance against DiDi due to the homophobic remark that she made to him in his office. However, when she made the remark, she casino online wasn”t doing it maliciously and didn”t conjure up the phrase herself; she was repeating something that Varla had said and using it in the way she used the insult that Varla lobbed against her earlier in the day. DiDi thought that she could share a laugh with Patsy over the insanity of their day and the vulgarity of their most problematic patient, but just hearing that type of language out of someone that he doesn”t know, especially at the end of a day he would rather forget, was enough to get Patsy to file the grievance and take serious offense with DiDi. She might have just started working at Billy Barnes, but if she”s ruled against at the hearing over the remark, DiDi will be joining Beverly in leaving the facility for good.

Elsewhere on Getting On, Birdy gets caught in a compromising position with a gentleman caller, while Patsy orders a ward-wide cleaning, Dr. James skips an important orientation, and Dawn learns that her evaluation isn”t going away anytime soon.

How will the nurses handle Birdy”s situation with her significant other? What type of trouble will Dr. James find herself in for skipping the orientation? Are Patsy and DiDi going to be able to work out their issues from the latter”s remark?