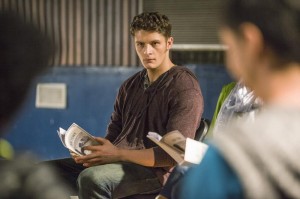 Supernatural skeptic Luke was forced to confront the idea that he was wrong to not believe that there were ghosts roaming Ravenswood when he had a fairly traumatic experience over a homemade Ouija board with Remy and Olivia. It’s understandable that he wouldn’t want to contemplate the existence of the paranormal, considering that it would dramatically alter his world view and add to the weight that was already on his shoulders due to his father’s death, but nearly getting killed while asking questions to Charles’ dead high school girlfriend will make you reconsider how you’ve always perceived things. But rather than lean into the idea of there being ghosts and a plot to bring him, his girlfriend, his sister, and Caleb down, Luke has decided to look for any type of distraction from the madness that he can get.

On tonight’s episode of Ravenswood, Luke might have found said distraction in the school play, which he joins as a way to occupy his time and keep his mind busy on something other than death, doom, and destruction. Once entrenched in the world of high school theater, he finds common ground with co-star Tess, who is still not on good terms with Olivia after her relationship with Springer was exposed. We’ve seen, though, that Tess can be quite manipulative and since Luke is feeling decidedly vulnerable after everything that’s happened recently, he’s very much in danger of being taken for a ride as a way of Tess getting revenge on Olivia. Whether he likes it or not, Olivia, Remy, and Caleb may be the only people he can trust now, since they’re the ones who know what he’s going through. But will Luke accept the fact that his life may have irrevocably changed following the death of Miranda and the botched séance?

Elsewhere on Ravenswood, Olivia finds out that her family and Miranda’s family have a shared history, while Caleb struggles to share what’s happened in Ravenswood with Hanna and Miranda thinks she may have found what she’s been searching for.

Is Luke going to find a way to distance himself from the ghostly presence in town? What do you think the commonality is between Olivia’s family and Miranda’s family? Would Hanna be able to understand what’s been going on in Ravenswood?