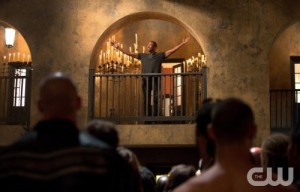 After finally unlinking Hayley from Sophie and putting Agnes, one of the leaders of the extremist band of witches intent on killing the baby, to death, Klaus and Elijah assumed that they had vanquished the threats to the so-called “demon spawn.” Of course, Marcel is still out there, but they neutralized the witches and bought themselves some time to prepare for the next attack by their old friend. Or they thought they did, as Marcel found the real home base of The Originals and kidnapped Hayley accordingly, likely looking to use her as leverage in his turf war with Klaus. But where did he end up taking Hayley? And how will Klaus and Elijah find her?

On tonight’s episode of The Originals, Klaus and Elijah turn to Sabine for help in locating Hayley, though they’ll have to hurry, as Hayley has only grown more concerned for herself and her baby. While The Originals are the reason that Marcel is who he is today, it’s been many years since they were around one another regularly, meaning that Klaus and Elijah might not be able to anticipate his moves as well as they once did. Granted, they won’t need to anticipate if they can outsmart, or use brute force against, those that stand between them and retrieving Hayley, but Marcel has grown quite strong as the reigning King of New Orleans, someone much more powerful than the boy Klaus, Elijah, and Rebekah helped turn into a man all those years ago. Outmaneuvering him today is a different beast than it would have been in the past and as such, there’s a real danger that they’ll be delayed long enough to where something could happen to Hayley or the baby.

Elsewhere on The Originals, Klaus has an unexpected encounter with Tyler in the bayou, while Davina makes a surprising connection and Rebekah receives an enticing offer from Marcel.

Where do you think Marcel is keeping Hayley? Will both she and her baby survive their time in captivity? Could Rebekah turn against her brothers through the deal with Marcel?