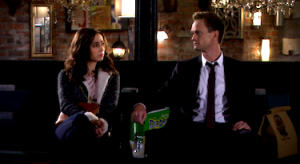 Last night’s episode of How I Met Your Mother saw a return to the bar and a time before Barney and Robin were engaged.  Specifically, the flashback led to Barney’s first encounter with the mother, and the circumstances that led him to his greatest challenge – getting Robin to fall in love with him.

The episode opened with Robin still in tears over her mother not coming to the wedding.  Apparently, the flashback was an attempt by Barney to cheer her up, though the transition was somewhat unclear.  We jump back six months in time to find Ted and Robin being more than just platonic friends, Lily telling Ted to knock if off with her, and Marshall encouraging Ted to go for it.  Ted insists to everyone that he and Robin are done, she’s made up her mind – he even plays through possible scenarios of what would happen if he made an attempt for her again – but ultimately admits that yes, there will always be something between them.

And then Ted finds Robin eating olives, which he had thought she hated.  Remember the Olive Theory?  Robin has changed her mind, and Ted is left watching her and Barney, wondering if she could change her mind again.

While this storyline did an interesting job of adding fuel to the Ted and Robin fire, I found that I didn’t like it.  Because really, at this point, as a fan of the show I am over Ted not being over Robin.  I can’t even find an emotional thread to get tied to because we know that Ted does not end up with Robin.  If the identity of the mother were still up in the air, if Robin weren’t “Aunt Robin” this would be an entirely different situation.

However, I did really like the shift in story for Barney.  This was something we had no clues on before this season – how Barney came to the decision to propose to Robin.  This episode revealed that the mother actually had a hand in it.  During Lily and Robin challenging him with a series of challenges to pick up girls, Barney runs into the mother in a drugstore.  And yes, tries to get her number.  But she’s no fool, sees right through is act and through him, really (“…because you’re really sad about something and this is your way of feeling better about yourself,”  “…you were in love and you messed it up.”).  The two end up sitting outside the store discussing relationships.  She hasn’t found the right guy yet (Barney briefly tries to think of someone to set her up with), and he’s still playing the game.

He wants to win.  With her note that it will take everything he has, Barney sits down to write the final page of the playbook – “The Robin.”

Overall – not the best episode of the season.  Even Bryan Cranston’s return as Hammond Druthers was a bit of a let down.  Druthers called, poaching Ted to join his firm in Chicago, which Ted ultimately turns down, thinking that there’s still something in New York for him…Robin.  But kudos to Cranston for giving a great performance.

As we move into mid-season I’m expecting the show to hit some slow spots, filler episodes to bridge the gap in some existing stories and provide transition into Barney and Robin’s wedding day.  Presumably, everyone will be meeting the mother before Ted – Marshall and Robin still have to meet her if that’s the case – and it is unclear if the two will meet and that will be the end of the series, or if there will be some follow-up to their relationship.

What do you think HIMYM fans?  Hit the comments.