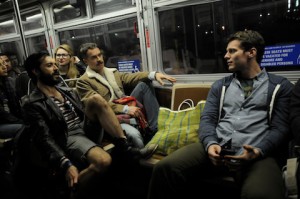 HBO has released the first teaser for Looking, its upcoming gay dramedy that stars Jonathan Groff (Glee), Murray Bartlett (All My Children), and Frankie J. Alvarez (Smash) as three friends living in San Francisco and trying to deal with the options available to a new generation of gay men. The series was created by Michael Lannan and will be based on a short he created titled Lorimer; among the executive producers for the project are Bored to Death‘s Sarah Condon and Weekend director Andrew Haigh, who is set to helm the first episode.

As expected, the teaser doesn’t reveal a whole lot about the show, which has the potential to be tremendously groundbreaking in that no gay-themed series has been tried on a mainstream cable network since Queer as Folk and The L Word were on Showtime. Following their demise, gay representation got better on the whole, but no successors to either immediately followed, unusual considering that they lasted five and six seasons, respectively. With the number of gay characters going down from last season to this season and the attitude toward same-sex marriage improving in recent years, now may be the time for a gay-themed series to truly break through or, at the very least, inspire networks to be braver regarding their content choices.

In addition to Groff, Bartlett, and Alvarez, the first season of Looking will feature guest appearances from Scott Bakula (Men of a Certain Age) as an entrepreneur and community leader and Russell Tovey (Being Human) as a co-worker of Groff’s character, someone who has achieved much success in the video game industry at a young age.

Will you be watching Looking? Do you think a gay-centric show can succeed in 2013? Would you like to see more gay-themed programming permeating mainstream cable networks?