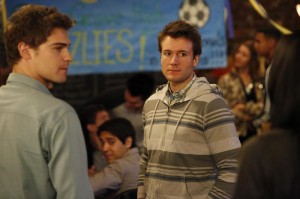 ABC Family has revealed the return dates for Pretty Little Liars, Twisted, Switched at Birth, and The Fosters, all of whom will resume in January.

Tuesday, January 7th will see the premieres of Pretty Little Liars and Twisted. The former, whose summer finale became the #1 “most social” TV series episode in history, will find the Liars struggling to make sense of the events in their life this past year and witnessing the darker side of Ezra. A Pretty Little Liars Halloween special is set to air Tuesday, October 22nd at 8:00, while an eight-hour marathon will precede the season premiere. The latter returns for the second half of its first season, which ended with Danny running away from home when he found out the police were on their way. While he has now implicated himself in the court of public opinion, Jo continues to deal with how much Danny and Lacey kept from her and Tess calls Vik back to town only to find out that the Desai family was hiding more than she knew. A seven-hour marathon of the series will air on Wednesday, January 1st.

Monday, January 13th finds Switched at Birth returning for a third season that begins with Daphne and Bay entering their senior year at Carlton. What should be a time of excitement, though, gets dampened by the school taking on hearing students who aren’t exactly thrilled to be there. Elsewhere, Toby gets a coaching position that could help draw the student body together, Bay begins working at the free clinic as a part of her probation, Daphne enrolls herself in a college art class, and the parents begin feeling the first pangs of empty nest syndrome. At 9:00 the same night, The Fosters kicks off the second half of its first season with the family still reeling from Callie’s decision to run away to Indiana with Wyatt. As Jesus and Lexi are also dealing with the loss of Lexi, who moved to Honduras with her parents, Lena must find it within herself to make peace with Stef’s decision to return to the force.

Which ABC Family shows will you be watching this winter? Do you think that Twisted will make it to a second season like The Fosters? How will the Liars react to everything that’s been going on in their lives?