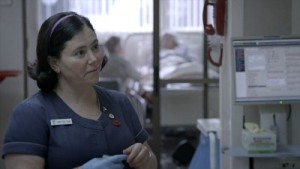 HBO has released the first trailer for upcoming comedy Getting On. From the creators of Big Love, the series, an adaptation of the British comedy of the same name, centers on three nurses (played by Roseanne‘s Laurie Metcalf, madTV‘s Alex Borstein, and Reno 911‘s Niecy Nash) working in the women’s extended-care facility of a hospital in Long Beach. Getting On will document the day-to-day lives of the nurses and doctors in the facilities as they deal with caring for the elderly in a broken, overcrowded healthcare system and working in a field that could prove to be emotionally taxing. Surrounded by death and tapped for resources, the women will have to make due with what they have at their disposal and try to keep it together long enough to provide the best healthcare possible for the patients, all things considered. Can they handle dealing with a poor healthcare system, incompetence from their higher-ups, and constant reminders of their own mortality?

The series premiere of Getting On is set to air Sunday, November 24th at 10:00 on HBO, the same night of the Boardwalk Empire fourth season finale and the premiere of Ja’mie Private School Girl. The first season of Getting On, which is premiering this late in the year due to the extra room created by a shortened season of True Blood, is set to contain six episodes.

Will you be watching Getting On? Do you think the show will fit well with the final season of Treme and fellow freshman series Ja’mie Private School Girl? How will the show compare to the series it’s based on?