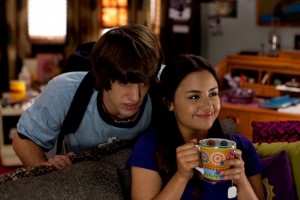 According to The Hollywood Reporter, Level Up alum Aimee Carrero has signed on for a recurring role on FX Cold War drama The Americans. She’s set to play Chena, a Sandinista fighter whose impulsiveness pushes her to do anything to support her cause. The show will thus be introducing the Nicaraguan contras into the equation of the second season, rebel groups who opposed the Sandinista Junta of National Reconstruction government in Nicaragua. In 1982, President Reagan signed the National Security Decision Directive 17, which gave the CIA the authority to support the contras. He would go on to authorize upwards of $40 million in aid to the contras, only to have all funding cut by the Boland Amendment.

It could be a fruitful creative decision to explore the contras, especially since the United States was heavily involved in the conflict through 1985. There’s a lot of material about security, nationalism, and rebellion that could be mined and anything the show can do to show how unstable the rest of the world was during the time of the Cold War is a good thing. However, there’s no indication of the level of involvement that the storyline will have during season two and whether or not Chena’s recurring role will be sizable in nature.

In addition to her role as tenacious Angie on the Cartoon Network series, Carrero has appeared on the likes of Lincoln Heights, Greek, and Men of a Certain Age. The acclaimed drama recently announced that Emmy winner Margo Martindale will return for at least one episode during the second season after her character was reassigned during the first season finale.

The second season of The Americans will premiere in February 2014 on FX.

Will you be watching The Americans next season? Are you looking forward to the series exploring the United States’ assistance of the Nicaraguan contras? What other historical events would you like to see the show cover next season?