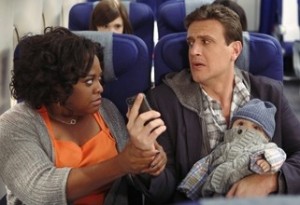 I cannot tell a lie, the thought that this is the last HIMYM season premiere is slightly upsetting – but if there had to be a great last, first episode, this was it.

HIMYM premiered Monday night with back-to-back episodes that served as a set up for the rest of Season 9, with everyone…but Marshall, arriving in Farhampton for Barney and Robin’s wedding weekend.  But he’ll get there – carpooling it with Sherri Shepherd, guest starring as Daphne.  The two were definitely a high point of the episode, arguing on a flight back to New York, succeeding in getting them both kicked off of the plane, and then in the car rental center, finally culminating in Daphne’s teasing of Marshall about the impending ride.   Considering how entertaining said B-plot was last night, I cannot wait to see how their road trip goes.

Meanwhile, Lily spent the first episode of the night meeting the mother, who is as of yet, still nameless. After getting fed up with Ted’s ridiculous driving habits (and his driving gloves), Lily hops a train to Farhampton, and in her upset over missing Marvin grabs the mother’s attention.  The scene gave some interesting foresight into the future relationship between the mother and Ted…but more on that later.

Barney and Robin had perhaps the most nervewracking journey, at least for them.  The two apparently share a crazy cousin, who thankfully is not a blood relative of either, as they learned after some familial interrogation, and later came face to face with one of Robin’s worst fears – Barney’s fear of commitment.  Wayne Brady returned as Barney’s brother James, only to drop the bomb that he and his partner Tom would be getting a divorce.  Robin was afraid to find out what would happen if Barney found out – James and Tom are the only couple that made him believe in marriage, despite Lily’s drunk protestations – but was sweetly relieved to find out that it’s a non-issue.  Twice in the premiere (technically once in each episode), we got romantic Barney/Robin moments.

But what of Ted, who we know has to meet the mother at some point this season?  Well, thanks to a lovely little flash-forward, we find out that he will, and a year from the wedding weekend will be back in Farhampton…but, for what reason?

However, we also got a sneak peek at Ted’s trip to Los Angeles, to visit Stella as a consequence of wanting to find Robin’s missing locket.  Nervous?

Back to the mother though.  Last month Neil Patrick Harris said that we will be getting to know the mother as her own character, and after watching the premiere episodes, I completely agree – I already like her.  I enjoyed the little hints her first scenes gave per her future relationship with Ted, and thought Cristin Milioti did a good job of establishing her presence within the show’s universe.

I am still very interested in seeing how the writers handle the season, which will be taking place over the course of the wedding weekend, and how the mother will meet everyone in time, while at the same time become part of the story without being the story.  But so far I think Season 9 is off to a great start.  I can’t find any down-points yet, only potential for new twists and turns.

What did you think of the HIMYM premiere?  Hit the comments below!