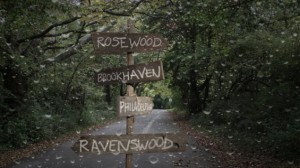 ABC Family has released a new promo for upcoming mystery Ravenswood, created by Joseph Dougherty, Oliver Goldstick, and I. Marlene King (Pretty Little Liars), who all co-wrote the first episode. The series tells the story of a town not far from Rosewood, Pennsylvania that has spent generations trapped under the burden of a curse and the five strangers who are bound by a desire to figure things out once and for all. Pretty Little Liars star Tyler Blackburn will join the cast as his Caleb Rivers goes to Ravenswood to find information for his friends and comes across a reason to stay for a period of time, wherein he will help try to break the curse and get back home to Rosewood.

The series premiere of Ravenswood is set to air Tuesday, October 22nd at 9:00 on ABC Family, where it will follow the Pretty Little Liars Halloween special. You can check out a trailer for the series here, as well as spoilers for the first episode here.

Will you be watching Ravenswood? How do you think the show will compare to Pretty Little Liars? Are you okay with Caleb moving from Rosewood to Ravenswood, possibly for an extended amount of time?