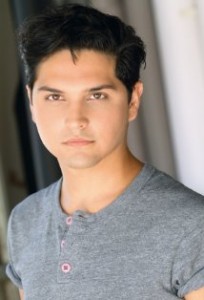 Per The Hollywood Reporter, upcoming ABC Family drama Chasing Life has added newcomer Augusto Aguilera (The Cynical Life of Harper Hall) in a recurring role. He’s set to play Kieran, a bad boy slacker who’s actually a smart young man. No word yet on when his first appearance will occur.

Starring Italia Ricci (Unnatural History), Chasing Life follows ambitious 20-something journalist April, who seemingly has everything going for her. She’s landed what could be her dream job, she’s struck up a connection with her handsome co-worker, and she’s on good terms with her family – her widowed mother Sara, difficult sister Brenna, and doting grandmother. However, that positive forward momentum comes to a screeching halt when she learns that she’s been diagnosed with cancer, something that could put a halt to her flourishing professional life and brand her as The Girl With Cancer before anyone has a chance to get to know her. Not only will she have to face the arduous journey toward beating the terminal illness, she’ll have to decide whether or not she wants to tell people about her diagnosis and if so, who, when, and how. April has made it this far on the strength of her will and through the sheer force of her independent streak, but it might be time for her to let someone else have the reins for a while, even if it means appearing “weak” in front of another person. Will she come clean about her condition before it starts to impact her daily life?

In addition to doing three episodes of the 2011 comedy, Aguilera’s only other television credit is an appearance on Geo’s Pizza in 2012. He joins Scott Michael Foster (Greek) and Steven Weber (Wings) in recurring on the one-hour drama, though their roles have yet to be announced.

Chasing Life is set to premiere sometime in 2014 on ABC Family. The series is based on Mexican telenovela Terminales.

Will you be watching Chasing Life? What role do you think Kieran will play in the first season? Who else would you like to see join the cast?