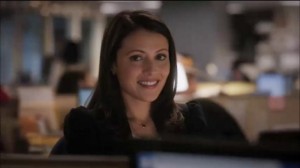 ABC Family has announced that upcoming drama Chasing Life has began production on its first season, with filming taking place in Santa Clarita, California and the first episode to be directed by Steve Miner (Switched at Birth).

Starring Italia Ricci (Unnatural History), the series follows ambitious 20-something April, a journalist from Boston whose promising professional career takes a major hit when she gets diagnosed with cancer. While she does have the family (her mother Sara, her sister Brenna, her grandmother) and friends (flirty co-worker Dominic) it takes to beat terminal illness, she might not want people to know about her condition, seeing as how it would stall the forward momentum she has at work and take away her personal independence due to her family worrying about her and forcing her to let them help. Though part of her thought in not telling people could be about her own denial of the diagnosis, April has made it this far in her career through her quick wits and unrelenting determination, so in her mind, if she can do everything she’s done on her own, she can beat cancer on her own.

In addition to Ricci, Chasing Life stars Mary Page Keller (NYPD Blue), Aisha Dee (I Hate My Teenage Daughter), Richard Brancatisano (The Elephant Princess) and Haley Ramm (Red State). The series, which will likely be debuting in the spring of 2014 following ABC Family announcing that it’ll keep its summer lineup (Switched at Birth/The Fosters; Pretty Little Liars/Twisted) in January, has also added two recurring guest stars in Scott Michael Foster (Greek) and Steven Weber (Wings), though no details about their characters have been released as of yet. You can check out a teaser for the series below.

Will you be watching Chasing Life when it premieres next year? Do you think that a concept like this can thrive on a network like ABC Family? Should the network allow it to self-start or do they need to pair it with something, considering that the concept isn’t a 100% guaranteed success?