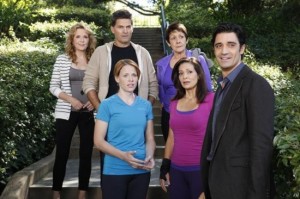 ABC Family has announced that it has renewed Peabody-winning drama Switched at Birth for a third season, as well as given full seasons to The Fosters and Twisted. Though no episode counts have been released for any of today’s pickups, all will be returning to the schedule in January alongside Pretty Little Liars, which has already been renewed.

“It’s thrilling to count our two freshman series, The Fosters and Twisted among our stable of strong, must-see, must-tweet series,” said Kate Juergens, Executive Vice President, Original Programming and Development and Chief Creative Officer, ABC Family. “Switched At Birth is like no other show on television and we are so proud to have it as part of our family. Adding additional seasons and episodes of our returning series spotlights how well our programming resonates with our audience.”

Given the recent cancellations of The Lying Game and Bunheads, a pickup for The Fosters and Twisted was all but a formality, especially since the former has been growing in the ratings since its premiere. They’ve yet to face the in-season network competition, though, which will likely help determine whether they’re to be new network mainstays or next in line to join the ABC Family scrap heap.

The decision to keep the summer lineup going into the winter will also make the network’s handling of Chasing Life very interesting, since it’s currently the odd drama out and should debut in the spring time frame that once belonged to Secret Life. Judging by its premise, it doesn’t seem like the type of show that could self-start, so it’s likely that Switched at Birth will be acting as its lead-in, meaning that the show could be airing in winter, spring, and summer 2014. Are Switched fans in store for another extended season like the 30+ episode first season?

Switched at Birth airs Mondays at 8:00 on ABC Family, with The Fosters following at 9:00. Twisted, meanwhile, airs Tuesdays at 9:00 after Pretty Little Liars.

Do you think that ABC Family made the right choice in renewing both of its new summer shows? Will The Fosters continue to grow in the ratings this January behind Switched at Birth? Is Twisted the best match for Pretty Little Liars?