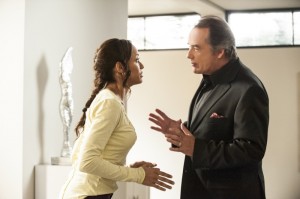 As with everything else in Beverly Hills, there was a hefty price for Rosie to pay once Adrian calmed down Evelyn’s obsession with Tucker and got her to agree not to tell Peri about the affair with Spence. Now that he’s been given the go to indulge in the nefarious activities that have helped ruin his marriage, Adrian sees nothing wrong with propositioning Rosie to become the latest in the long line of women desperate for money and have relations with one of his many friends. Unfortunately for Rosie, she’s in a bit of a bind, as she goes to Spence to see if he can’t do anything; for one, the two aren’t together anymore, so it’s not his responsibility to defend her honor when she falls like someone has disrespected her, and secondly, if he were to go to the Powell’s and get into a big fight, word could leak and rumors would be spread about the nature of the scuffle. Worse yet, Adrian could decide to tell Peri of the affair himself, so Rosie might have to work herself out of this mess herself.

Sunday, August 25th – “Hanging the Drapes”
Valentina worries Remi will hate her when he returns from rehab; Rosie wants Spence to defend her honor after Adrian propositions her; Marisol learns that her son is involved with nefarious activities; Carmen experiences trouble honoring a favor for Alejandro; Taylor and Michael get exciting news.

Sunday, September 8th – “Cleaning Out the Closet”
Alejandro and Carmen offer different opinions about his new relationship; Marisol gets closer to the truth; Rosie cleans up a serious mess for Peri; Philippe and Genevieve grow closer, but Zoila doesn’t believe that he’s changed his philandering ways.

Devious Maids airs Sundays at 10:00 on Lifetime. The series has already been renewed for a second season.

Do you think that Remi will hate Valentina when he gets out of rehab? What kind of mess caused by Peri will Rosie have to clean up? Will Carmen and Alejandro grow closer now that she’s able to be honest with him?