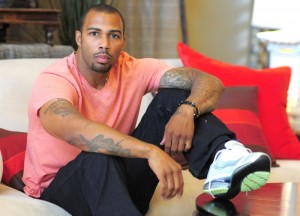 Starz has announced that Omari Hardwick has been named the lead in upcoming drama series Power, to be executive produced by 50 Cent and showran by The Good Wife‘s Courtney Kemp Agboh. The series will be one of several new additions to the network next year, as Michael Bay’s Black Sails and crime drama Fortitude will also be making their debuts in 2014.

Power tells the story of James “Ghost” St. Patrick, a nightclub owner who has eyes on becoming a Fortune 500 mogul and one of the elites of New York City. However, behind the strait-laced demeanor and ambitious aspirations is a man willing to do anything to make his dreams come true, even if it means living a double life in order to fatten his wallet and expand his connections. Specifically, Ghost is the kingpin of the most lucrative drug network in New York and has been for quite some time. While he’s been able to fool his family and friends into thinking that he’s just a small-time guy with big-time goals, he’s contemplating giving up his role in the drug operation to go straight, though it won’t be quite that easy. He makes a lot of people a lot of money and knows enough secrets to bring down some very powerful man, so even if he manages to find a suitable substitute to take over his duties, he’ll still be a target long after he’s left the game. Can he keep everyone in his life safe, should he decide to break away from the drug game and go legit?

“Omari is an actor of incredible range and versatility,” said Starz Managing Director, Carmi Zlotnik. “When we met Omari, we knew he had all the tools needed to play such a complicated and complex character. We look forward to him bringing Ghost to life on the screen.”

In addition to his role on the two-season TNT police drama, Hardwick has appeared on the likes of Breakout Kings, Saved, and Lie to Me.

Power is set to premiere sometime in 2014 on Starz.

Will you be watching Power? Does the role sound like something Hardwick would be well-suited in bringing to life? Who else would you like to see join the cast?