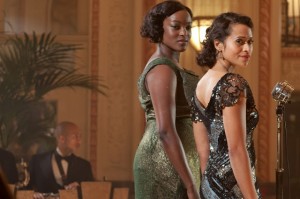 Starz has announced that miniseries Dancing on the Edge is set to premiere Saturday, October 19th at 10:00 following the finale of fellow British import The White Queen. The five-part drama will then air Saturdays at 9:00 for the rest of its run, culminating in a November 23rd epilogue titled Interviewing Louis.

Written by Steven Poliakoff (Glorious 39) and based on accounts of the Duke Ellington Band mingling with Duke of Windsor Edward VIII, Dancing on the Edge tells the story of the Louis Lester Band, a group of black jazz musicians who steadily rise to stardom by performing at events for London’s elite. With the help of the more progressive socialites and aristocrats of 1930s society, the band quickly becomes acclimated with the sophisticated lifestyle that had previously only been a mystery to them – that is, until they become involved in a murder conspiracy that threatens not only their sterling reputations as performers, but their lives and ability to safely reside in London. The band was already doing what most thought was impossible by becoming a prominent part of elite society during a time when most looked down on the idea of black entertainment, but can they find a way to prove their innocence, keep each other safe, and resume what could have been a tremendously successful career?

Dancing on the Edge stars Chiwetel Ejiofor (12 Years a Slave), Matthew Goode (A Single Man), Jacqueline Bisset (Two Jacks), Janet Montgomery (Black Swan), Anthony Head (Buffy the Vampire Slayer), and John Goodman (Damages). You can get a look at the series, which aired earlier this year on BBC Two, below.

Will you be watching Dancing on the Edge? Would you like to see more international miniseries come to American shores? With Dancing on the Edge set to premiere in October and Power coming in 2014, should Starz start crafting most of its programming with minority leads?