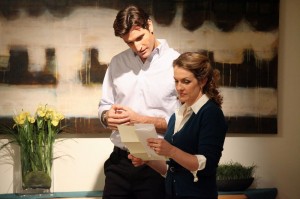 According to TVLine, Mistresses will be moving to a new timeslot starting this Monday. The series is set to air at 9:00 for the final three episodes of its first season in what could turn out to be a positive move for the show, as it had to face summer juggernaut Under the Dome for much of its run. While it still won’t have an original lead-in (encores of Shark Tank) or lead-out (encores of Castle), it will be facing less direct competition and could recover from the series low ratings it garnered for its most recent episode, which were also the result of two weeks of preemption.

While a move this late in the season could conceivably result in further ratings lows, it has to be looked at as a sign that ABC isn’t ready to throw in the towel on the show just yet. The network has already extended options on the cast’s contracts through the end of the season, likely to see how ratings hold up and whether a renewal would be feasible, and made the entire series available on its website to gain new viewers; additionally, the scheduling change could be seen as an indication that they think the low ratings aren’t totally due to the audience rejecting the show, particularly given the show’s fairly solid DVR numbers. Had ABC already resigned itself to cancelling the show, it would have likely left the show at 10:00 to face the Under the Dome buzzsaw or burned the remaining episodes off, but if Mistresses can make some decent gains at 9:00, it might have a chance at a second season.

You can check out a preview of the next episode of Mistresses here.

Do you think the move is a sign that ABC has yet to give up hope on the freshman soap? What do you hope happens during the final three episodes of the season? Would Mistresses have been more successful had ABC aired it in-season rather than keeping it for summer?