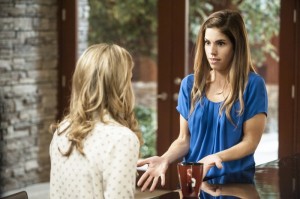 Lifetime has announced that it has renewed Devious Maids for a 13-episode second season, which will premiere in 2014. The series, which stars the likes of Ana Ortiz (Ugly Betty), Judy Reyes (Scrubs), and Roselyn Sanchez (Rush Hour 2) as maids in Beverly Hills, has shown significant ratings growth since its modest debut, becoming the network’s fastest-growing drama ever and nearly doubling Lifetime’s primetime Hispanic viewing audience.

“One of the most daring series on television, Devious Maids has quickly become a hit.  We are very proud of the show and are delighted to continue our partnership with Marc Cherry, Eva Longoria, Sabrina Wind, ABC Studios and Televisa USA.  I am thrilled we are bringing Devious Maids back for a second season to lead our scripted slate in 2014,” said Rob Sharenow, Executive Vice President and General Manager of Lifetime.

First conceived as a project for ABC, Devious Maids was not picked up last spring in favor of dramas like Nashville, Red Widow, and 666 Park Avenue. However, the series, one of the only on television with a primarily Hispanic cast, quickly found a home in Lifetime thanks to producer ABC Studios and has picked up in the ratings due to strong word-of-mouth. In addition to Ortiz, Reyes, and Sanchez, the series stars Dania Ramirez (Premium Rush), Edy Ganem (Livin’ Loud), Susan Lucci (All My Children), Rebecca Wisocky (Pollock), and Drew Van Acker (Pretty Little Liars).

Devious Maids airs Sundays at 10:00 on Lifetime. You can check out spoilers for an upcoming episode of the series here.

What have you thought of Devious Maids thus far? Do you think that we’ve met Flora’s killer already, or at least the person directly responsible (e.g. paying for it to happen, encouraging whoever killed her to do it, setting up the murder at the party) for her death? How will the show look once they solve the murder and Marisol gets her son out of prison?