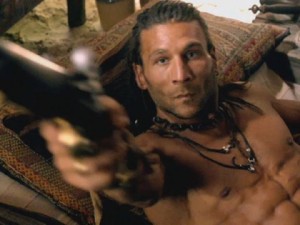 Starz has officially renewed pirate drama Black Sails for a second season months ahead of its scheduled television premiere. Production on the 10-episode second season, ordered so early due to an enthusiastic fan response at a Comic-Con exclusive screening, is set to begin this November in Cape Town, South Africa.

“Michael Bay, Jon Steinberg and their teams delivered a spectacular first season  of Black Sails, and we are incredibly proud of everyone’s work,” said Chris  Albrecht, CEO of Starz.  “Based on the strong fan response to the preview  screening at last week’s Comic-Con, we felt an early order for a second season  would allow the writers, cast and crew enough time and space to continue  crafting such unique and epic storytelling.”

Starring Toby Stephens as much feared Captain Flint, Black Sails takes place twenty years prior to the events of Robert Louis Stevenson’s “Treasure Island” and finds Flint taking John Silver (Luke Arnold) onto his crew. He’ll need all the help he can get right now, though, as the pirates are fighting for their last respite – notorious criminal haven New Providence Island, a place where anything and everything goes.

This isn’t the first time that Starz has opted to renew a new series ahead of its premiere, as Boss and Magic City were both granted additional seasons before one episode had aired. However, the Kelsey Grammer political drama didn’t make it to a third season and the Miami period drama has yet to be given word on its renewal status, though with only three episodes remaining in the season, news will likely break sometime next month.

The series premiere of Black Sails airs in January 2014. You can check out a trailer for the show here, as well as key art and two teasers here.

Will you be watching Black Sails? Do you think it’s smart for Starz to renew the show so early? Is there a chance that the show is a worthy successor to Spartacus?